To make Pies that the Birds may be alive in them, and flie out when it is cut up. 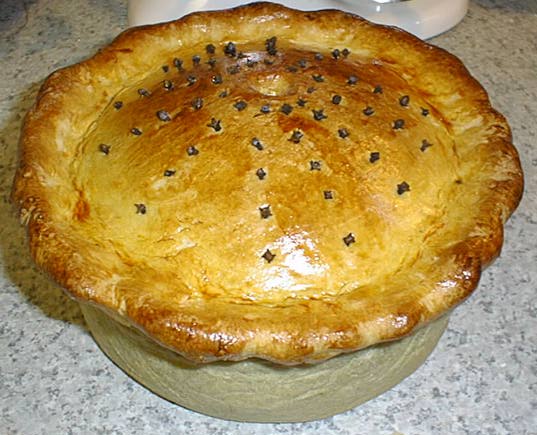 Make the coffin of a great pie or pastry, in the bottome thereof make a hole as big as your fist, or bigger if you will, let the sides of the coffin bee somewhat higher then ordinary pies, which done put it full of flower and bake it, and being baked, open the hole in the bottome, and take out the flower. Then having a pie of the bigness of the hole in the bottome of the coffin aforesaid, you shal put it into the coffin, withall put into the said coffin round about the aforesaid pie as many small live birds as the empty coffin will hold, besides the pie aforesaid. And this is to be done at such time as you send the pie to the table, and set before the guests: where uncovering or cutting up the lid of the great pie, all the birds will flie out, which is to delight and pleasure shew to the company. And because they shall not bee altogether mocked, you shall cut open the small pie, and in this sort you may make many others, the like you may do with a tart.
(From Epulario, 1598)

Sing a song of six-pence, a pocket full of rye
Four and twenty blackbirds, baked in a pie
When the pie was opened, the birds began to sing.
Now wasnt that a tasty dish to set before the king!

This fantastic recipe, the memory of which has been preserved for us in this nursery rhyme, is sure to bring applause and gasps of surprise at any feast. Dishes such as this one were part of the entertainment at a feast, and fell into two broad categories: elaborate spectacular dishes to be looked at and admired, and illusion foods that seemed to be something they were not. The former, called sotelties, could be quite large, and were not always constructed of edible ingredients. Castles, arbors, fantastic beasts, and allegorical figures bearing written mottos were paraded around the hall at the conclusion of a course. A feast by John Chandler, Bishop of Salisbury, circa 1417, featured three sotelties: a Lamb of God, a leopard, and an eagle. A feast by John Stafford, Bishop of Bath and Wells, on September 16th, 1425, also had three sotelties: a doctor of law, an eagle, and Saint Andrew. Following this last sotelty came fruit, wafers, and vyn dowce [a sweet].

Illusion foods, though not always spectacular in appearance, were intended to trick the diner into believing he was receiving something other than what he was actually served. One marvelous illusion is found in Delights for Ladies, by Sir Hugh Plat (1609). He describes how to fashion life-size marchpane animals "molded either in plaster from life, or else carued in wood" and then to "dredge ouer your foule with crums of bread, cinamon and sugar boiled together: and so they will seem as if they were rosted and breaded By this meanes, a banquet [dessert course] may bee presented in the forme of a supper, being a very rare and strange deuice."


This recipe from Epulario makes one empty covered pie, spacious enough to accommodate 3 parakeets or 6 finches comfortably. Or, if you are feeling particularly mischievous, do as Robert May did, and fill the pie with live frogs to "make the ladies to skip and shreek." The remaining dough is sufficient to make six small raised pies (with a filling of your choice), so that your guests "shall not bee altogether mocked." Although the original recipe instructs us to insert one of these small pies into the shell for the guests to eat, it would quickly become dirty and unwholesome to eat, so I suggest you serve the small pies separately.

You may make the hollow shell several days in advance, and store it in a dry place. Use the leftover baked flour to make Fine Cakes. Note: This pie is necessarily very sturdy so that it may stand independently. It is so hard that the lid may be thrown with force upon the ground and will not break.

To Make Pies that the Birds may be alive in them

Making the Dough. Boil the water and salt in a large pot. Add lard, and stir until melted. Place 6 lbs. of flour in a large bowl (reserve the remaining 6 lbs. of flour), and make a well in the center. Add the boiling water mixture to the flour, a little at a time, and stir with a wooden spoon to mix thoroughly. When all the water has been added and stirred in, and the mixture has cooled slightly, take up small handfuls of the dough and knead on a floured board until the mixture is smooth and can be formed into a ball. Set the balls aside in a large bowl, and cover them with a damp cloth until all the flour mixture has been kneaded. Let rest a few minutes. This rest will make the dough more elastic, and easier to work with.

Making the Shell. Form about half the dough into a large ball. Roll it out, at least 1/4" thick, on a lightly floured surface to form a 21" diameter circle. Line the mold with this circle, pressing it firmly into place. Trim the excess dough, leaving at least 1" hanging over the edge. Cut a 4" diameter hole in the base of the bottom crust. Take the remaining 6 lbs. of flour and fill the pie. Mound up the flour in the center. Take a little more than half of the remaining dough, and form a ball. Roll it out to form a 13" diameter circle. Cover the bottom crust. Moisten and seal the edges. Trim away the excess, leaving about 1" hanging over the edge. Crimp the edges high. Poke a steam vent in the center of the top crust. Optional: brush the top crust with the egg yolk wash, and garnish with whole cloves. Bake at 400 degrees F. for 50 minutes. Reduce heat to 350 degrees F. and bake 30 minutes more, or until the crust feels hard when tapped. Remove from oven and let cool.

When cool, remove the crust gently from the mold.  You may separate the top from the bottom crust before service, so as not to injure the birds during presentation. The top crust can be re-attached using toothpicks. Remove the flour from the center of the pie (it will have caked, so carefully use a metal spoon to loosen it). If the bottom crust is still spongy to the touch, return the crust to the mold and bake for an additional 20 minutes at 400 degrees F. Remove from oven and cool completely.

Presentation. When the shell is completely cold, and just before you are ready to serve, you may gently insert live birds (or frogs, etc.) into the crust via the hole in the bottom. Place the pie on a serving platter, and garnish as you wish.  Serve immediately.

Back to Cindy Renfrow's Home Page


Please send your comments to cindy at thousandeggs.com